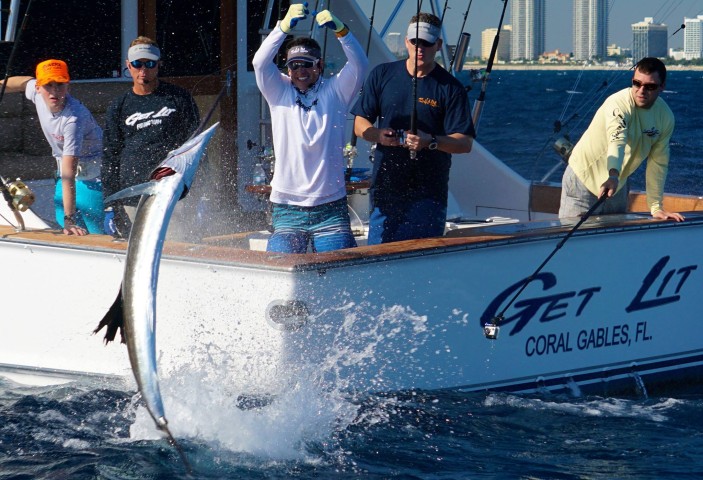 Miami Beach, is known for its night life, attractions and thrills—but it’s also known for some of the best billfishing found anywhere in the world. Each year, thousands of anglers travel to South Florida to target our thriving Atlantic sailfish population. It’s no wonder the Atlantic sailfish is Florida’s official state fish.

My fishing career was sparked at 10 years old, when I caught my first sailfish off of Miami Beach, while on vacation. I’ve been professionally fishing for this species for over 25 years now, and I owe it to my dad for taking me sailfishing at such a young age.

Long before I started hosting my national TV show, “Bass2Billfish with Peter Miller” on NBC Sports, I started the Get Lit Fishing Team, in 1989, with my best friend Kitt Toomey. The first Get Lit was a 25-foot Dusky, and 25 years later, it is now a 60-foot Spencer. Since 1989 we have won or placed in over 120 high profile billfish tournaments and are 3-time World Sailfish Championship winners. We’ve spent a lot of time billfishing, with the majority of that time on the hunt for sailfish. But we’ll never turn down a blue marlin or swordfish, either!

Through trial and error, and loads of practice, we’ve developed a system that consistently produces. Sailfish can be found year-round off the coast of South Florida, but the winter months tend to provide the best fishing. The peak of our sailfish season starts in late November and runs through April. There are certain conditions that can give you the best shot. Once the winter cold fronts start settling into a cyclical pattern, pushing down the east coast of Florida, the sailfish are most active and show up in the greatest numbers. The weather might be sloppy this time of year, but the payoff is well worth it. Winter cold fronts mean that sailfish will most likely be traveling south, nose into the Gulf Stream current, which runs north. My favorite fishing condition for sailfish is directly following a cold front, with a strong north wind. In these conditions, the bite is usually visual. Sails will literally surf down waves, allowing you to sight fish.

The most successful method for sailfishing is kite fishing. Kite fishing is effective for a number of species, as the kite baits tend to be irresistible to a number of pelagics and inshore species including blackfin tuna, mahi-mahi, kingfish, and, of course, sailfish. The majority of the South Florida captains run a kite setup employing two kites, with three baits dangling from each kite on release clips. This makes for a lot of bait in the water. The kites keep the bait carefully suspended just below the surface without extra line and leader hanging in the water, creating the cleanest presentation. For the beginner, a short rod and reel attached to a kite will suffice. Specialty equipment for kite fishing is widely available. Although pricey, an electric reel can be a great asset due to the amount of time you will save by just pressing a button to reel in the kite.

Light tackle is the name of the game, with a 20-pound conventional set up being the perfect rig. Reels with a fast retrieve are mandatory. For leader material, we generally use 15 feet of 50- pound fluorocarbon. The lighter the material, the better your bait presentation. For hooks, we use 6/0 to 7/0 circle hooks. The hook is bridled to your bait with a rubber band. The bridle allows the bait to look as natural as possible and swim freely. Baits of choice include goggle-eyes, threadfin herring and large pilchards. Sailfish can weigh anywhere from 20 to 80 pounds and sometimes larger, and they’ve been clocked at over 70 miles per hour, making them one of the fastest fish in the ocean. They’re acrobatic and unpredictable. Captain, angler and mate all need to be aware as sailfish have been known to jump in boats.

Sailfish travel in schools, so after a single fish is hooked, the other baits are left in the water to try and capitalize on the possibility of a multiple hookup. This is quite commonplace and there is nothing that can get your adrenaline pumping more than multiple sailfish jumping all around your boat.

If you get the chance, I suggest heading to South Florida and trying your luck in this iconic fishery. Contact one of our local charters here in Miami. Captain Quinton Dieterle, our team captain, has his own charter service. It’s called Cutting Edge Sportfishing, and you can find him at www.miamicharterfishing.com, or by phone (305) 361-9740. Also, Captain Jon “Froggy” Cooper, another member of our Get Lit Fishing Team, runs Diversion Charters. He can be reached at (305) 724-6870. These captains will teach you the fundamentals, and will put you on the fish. 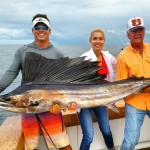 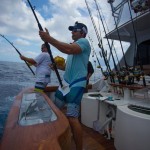 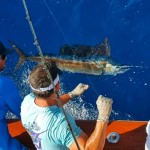